Posted on February 15, 2017 by westhartfordea

Thank you for contacting me about President Donald Trump’s nomination of Betsy DeVos to serve as Secretary of Education. Because you have written to me in the past about Betsy DeVos, I wanted to reach out and update you about recent actions on her nomination.

As a member of the Health, Education, Labor, and Pensions (HELP) Committee, I voted against the nomination of Betsy DeVos because I have serious concerns about her ability to be a strong and inclusive advocate for students and public schools. Unfortunately, the Senate confirmed her nomination by a vote of 51-50 on February 7, 2017, with Vice President Pence casting the deciding vote. Prior to her confirmation, I spoke on the Senate floor about the reasons I voted against her and you can watch those remarks here. 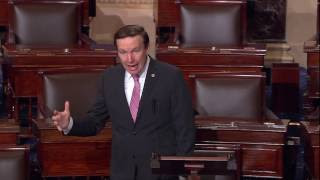 I’ve never seen people in Connecticut respond to a nominee like they responded to the nomination of Betsy DeVos. In just the two weeks between her hearing and the committee vote, I heard from more than 14,000 people from across Connecticut opposing her nomination, and supporting great public schools for all children regardless of their backgrounds. I heard you, and I want to thank you for your engagement. Do not doubt your power as a citizen. Keep holding us accountable. No one person or one party can win every fight, but do not allow setbacks to silence your voice.

Although Secretary Devos and I fundamentally disagree about the best strategies to improve our public education system, I respect that she has focused her advocacy and philanthropy on schools. However, her answers at her confirmation hearing before the HELP Committee were beyond disturbing. I was dumbfounded to hear her support President Trump’s rollback of gun-free school zones and fail to say anything at all about the danger of having guns in classrooms. Equally stunning was her equivocation on enforcing the Individuals with Disabilities Education Act (IDEA). The idea that the next Secretary of Education may not enforce the primary federal civil rights law protecting students with disabilities is frightening to many families who have fought for years to ensure their children have the same educational opportunities as those without disabilities. The federal government got into the business of education policy because of civil rights, and that imperative has not gone away.

Further, I am deeply concerned by her unwillingness to unequivocally support the bipartisan and broadly-supported accountability framework in the Every Student Succeeds Act. These rules, which I championed, require that states and districts hold schools accountable and provide them with the support they need to ensure that all students–no matter their zip code, race, ethnicity or sexual orientation–get a great public education.

Our nation’s public elementary and secondary schools are at a critical juncture. The Every Student Succeeds Act is being implemented and states are still adapting to the law’s new requirements. As the law’s roll out continues, states and local school boards will have more authority over curriculum, assessments, and standards. But as we hand over greater responsibility to the states, the federal government must not relinquish its responsibility to protect the rights of vulnerable and historically overlooked students. My concern about Secretary Devos’s commitment to that principle is one of the main reasons I strongly oppose her nomination. Please be assured I will continue to hold the Department of Education accountable going forward.

Thank you again for contacting me about this matter.  I appreciate hearing from you and assure you that I will always do my best to represent the views of my constituents in the Senate. In the future, please do not hesitate to call me in my Connecticut office at (860) 549-8463 or in my Washington office at (202) 224-4041.

We are the official page of the West Hartford Education Association, in West Hartford, CT.
View all posts by westhartfordea →
This entry was posted in Education & Politics. Bookmark the permalink.
%d bloggers like this: